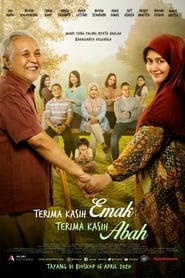 The story begins when Abah has lost his home and property. That is a consequence of paying too much brother-in-law’s debt. Then Abah and his family moved to a house in a remote village in West Java. The house is his childhood home, a legacy from his father. Initially, they planned to stay temporarily during the trial of his brother’s debt case. Unfortunately, they lost in court. The court’s decision left Abah’s family threatened to live forever in the small house in a state of poverty. Not only Abah, Euis, Abah’s first child also helped raise money for the family. While Cemara or Ara, who is still small, seems to remain eager to live life. They work hand in hand to rise from the deterioration of economic conditions. The Cemara family is an adaptation of a television series with the same title by Arswendo Atmowiloto.