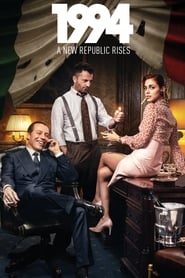 After the breakdown of the old government, and with it the First Republic, Italy changed for good in 1994. Spinster Leo is all too aware of this. He pushed hard to see Berlusconi get elected Prime Minister. He knows it’s not easy to win power, but holding on to it verges on the impossible. By the same token, it seems equally impossible for populist politician Pietro to change. Even now that he has an office at the Prime Minister’s premises in Rome, he still can’t cast off his old bad habits. Nor can he forget the only woman he has ever loved. A former TV starlet now turned politician and Congresswoman, Veronica has to decide who the man of her life is going to be. She has realized she no longer wants to be just a woman on the arm of powerful men. It is the start of her own push for power. In 1994 everything, yet nothing really changes: a new republic rises.